There are many, many good Tattoo Aftercare products on the market now, Bepanthan is not one of them. I would ask that you do not use it on my work. I have my own formula which works well 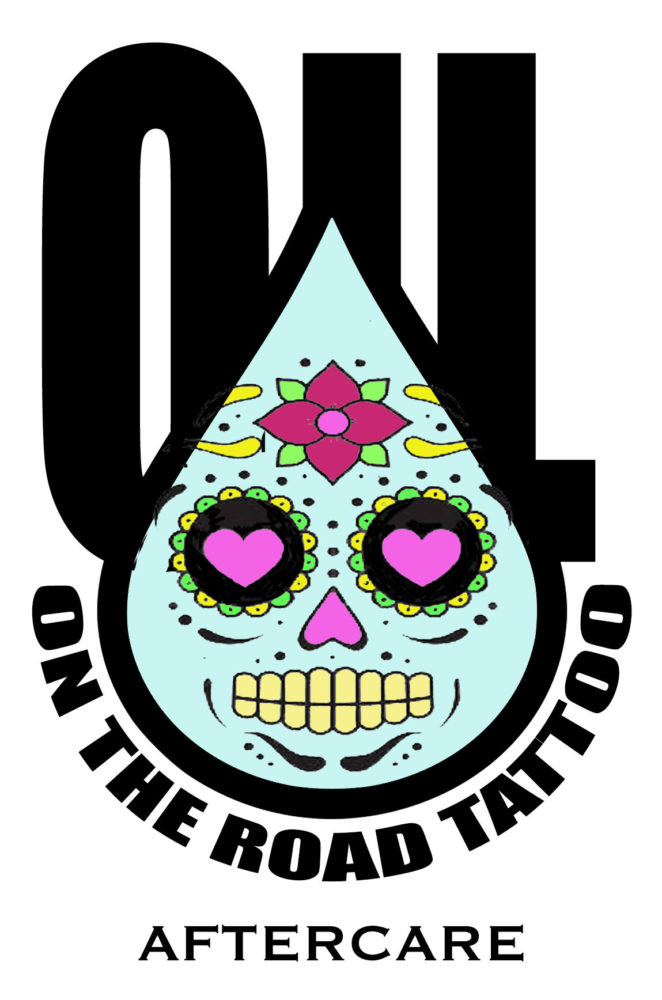 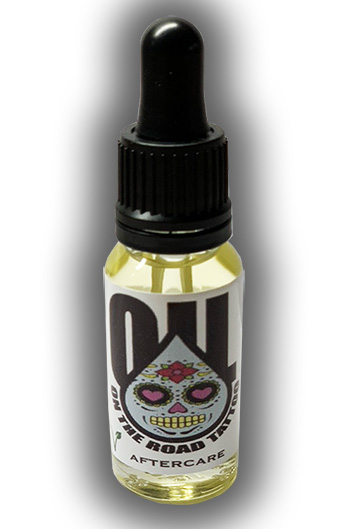 Our Vegan, Plant Based Tattoo Aftercare, On The Road Tattoo OIL is made from natural oils and is an innovative way to heal fresh tattoos. The applicator is designed to avoid cross contamination and clogging, this means that our oil is easy to store and easy to carry and apply on the move.

We have carefully selected our 100% natural ingredients to give many benefits while healing new Ink.  The oil easily moisturises the skin, promotes natural healing but does not clog pores (a common complaint when using other healing products).  High in Vitamins (especially Vitamins A, C & E), On The Road Tattoo OIL contains antioxidants, anti-inflammatories and is antibacterial.  It has natural numbing properties to sooth your skin.

The application of On The Road Tattoo OIL is aided by the packaging to ensure the most hygienic distribution and gives careful dispensing while being able to target specific areas if needs be.

Your finished tattoo will be dressed, we do not want the air to get to the tattoo or there is a chance of scabbing. Think of your new tattoo as a graze, we have all at some point in our lives taken the skin off our knees. A tattoo will heal in a similar way if left to its own devices…

Simply use On The Road Tattoo OIL to moisturise your new tattoo while it heals. A few drops are all that is needed to cover quite a lot of space, it goes a very very long way. On The Road Tattoo Oil has been tested extensively over a number of years.

Should you get any scabbing or sore areas when your tattoo is healing then  you can target that area with a few drips from the dropper applicator. Should your tattoo appear red and “angry” then always let  the tattoo “dry out” before applying more aftercare product.

On The Road Tattoo OIL heals tattoos quickly, if applied correctly. But nothing beats staying fully hydrated and good amounts of vitamin C in the system. You may want to consider “upping” your H20 and vegetable intake a week or so before your tattoo.

Never use too much aftercare on your new tattoo, always remember that less is more and that your tattoo needs to be able to breath through the healing process. 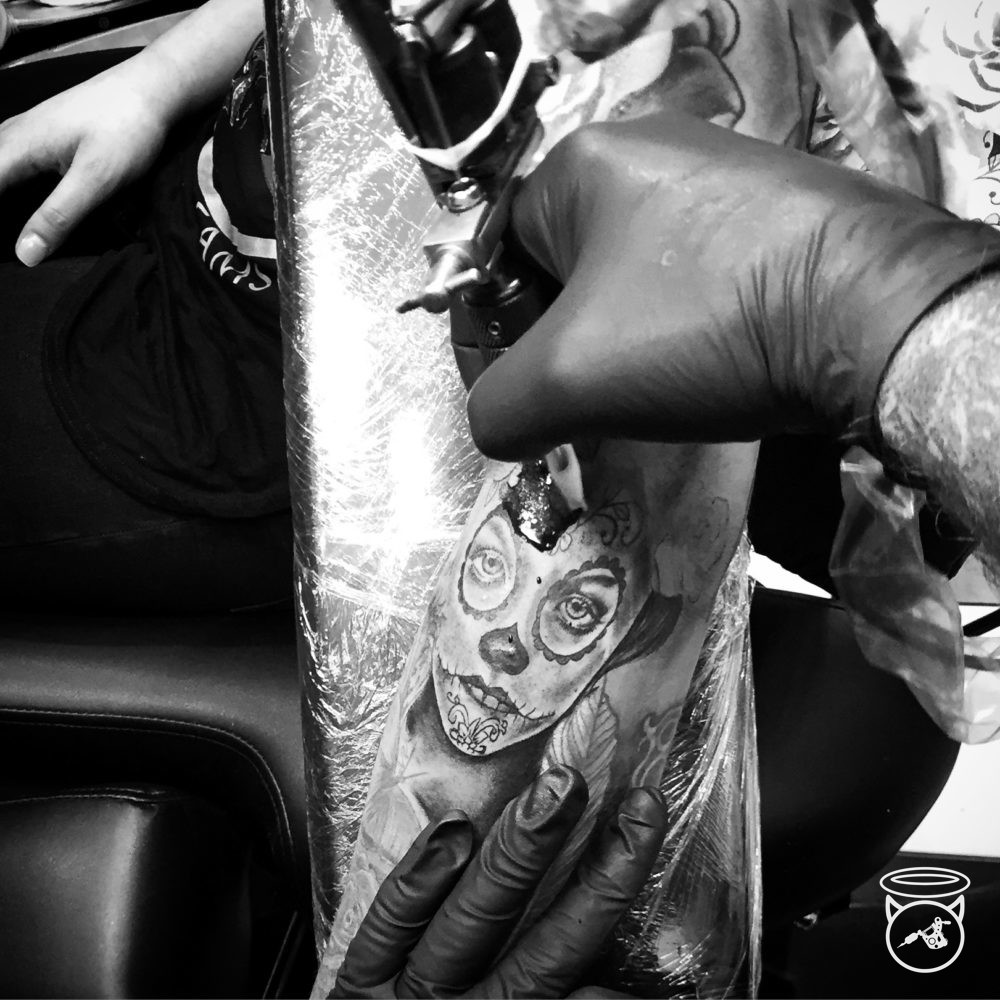 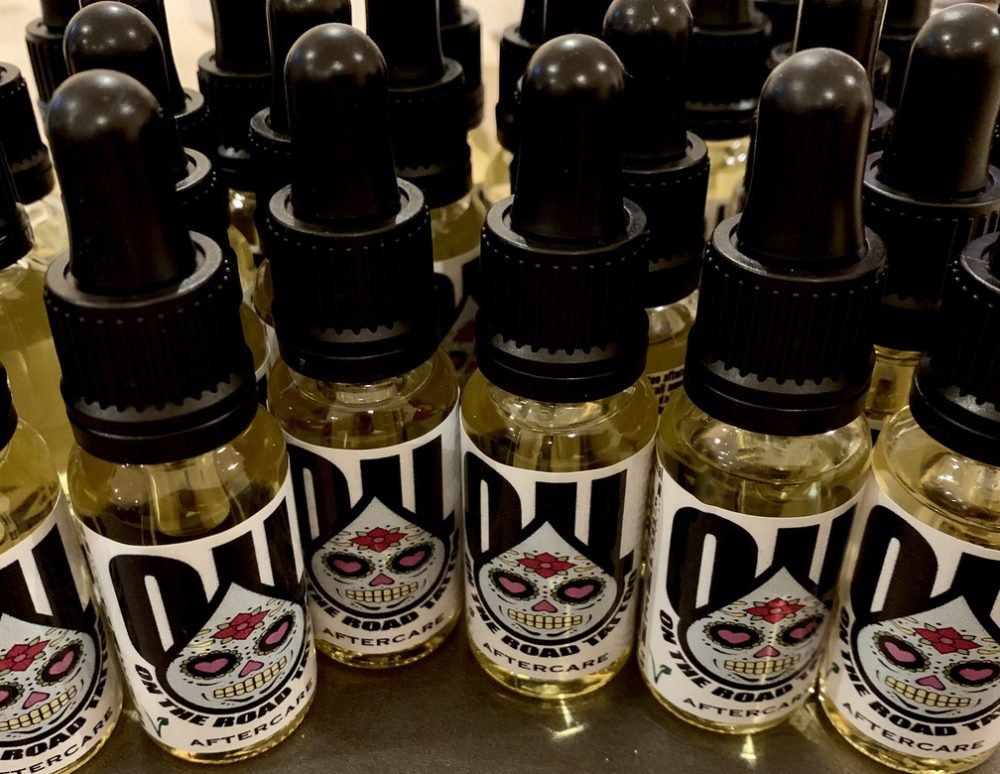 If you are a professional licensed tattoo artist working from a studio then get in touch to discuss a sample of the product. We can supply you with trade prices for your studio so that you can re-sell the Oil to your customers. Currently we are seeking a distributor and would welcome wholesale enquiries. 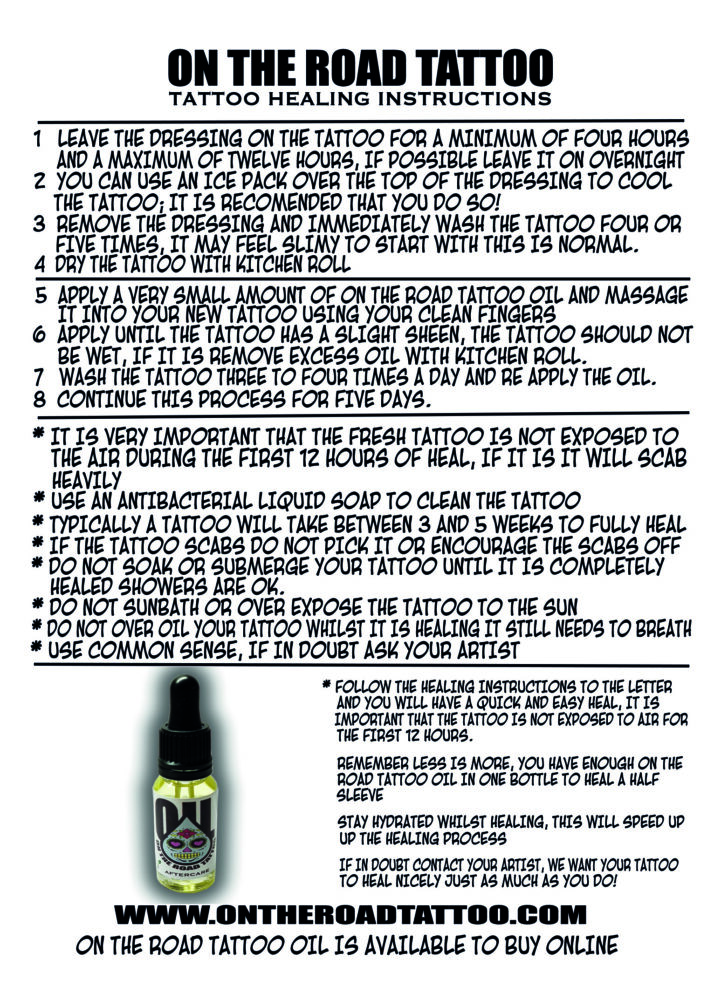 ON THE ROAD TATTOO OIL IS AVAILABLE IN THE ONLINE SHOP AT £6.00 PER BOTTLE.

FOR TRADE OR WHOLESALE PRICES PLEASE CONTACT US TODAY.

EVERY ARTIST HAS THEIR OWN HEALING INSTRUCTIONS.

Many people use Bepathen to heal their tattoos, I would ask that you do not use it on my work, it can and often does cause a nasty reaction.

The main ingredient of  Bepanthen is dexpanthenol which is derived from panthenol. In the cosmetic industry, this is used as an emollient and moisturiser. As an ointment, it penetrates the skin and is used for minor skin irritation such as diaper rash and sunburn. This is why some use it to moisturise tattoos.

Further, Bepanthen contains petrolatum which is commonly known as petroleum jelly. It has been widely used as an over the counter skin protectant and additive in many cosmetic products. Petrolatum is mineral oil jelly which is a waste product from the distillation of petroleum to produce gasoline. Essentially this product prevents evaporation of moisture from the skin so the skin cannot then absorb, excrete or breathe. Petrolatum can cause adverse effects such as suffocation of the skin, premature aging, acne and even breast tumours. People who have sensitive skin may also experience allergic contact dermatitis.

Bepanthen also contains paraffinum liquidum, more commonly known as mineral oil. Mineral oil is also a petroleum by-product and is basically a liquid form of petroleum jelly. It is popular in cosmetics because of its wide availability and low cost. Aside from cosmetic products, it is also used as a preservative, coolant, lubricant, and thermal fluid. Although it has many advantages, mineral oil or paraffinum liquidum has also been found to increase the risk of cancer in rats that are irradiated twice a week for 20 weeks.

Lanolin and lanolin alcohol are also found in Bepanthen ointment. Lanolin is an oily material that is secreted from the sebaceous glands of sheep. It is used as an emulsifier meaning it binds well with water which makes it very useful in cosmetic formulations and is generally safe on the skin. However, if it’s ingested it can cause lanolin poisoning which can cause nausea, vomiting, and diarrhea. It can also cause allergic reaction or contact dermatitis rash in some people who are sensitive to lanolin. Other possible skin reactions include stinging or burning sensations, softening of the skin, feeling as though the skin is soggy, and some people may also notice that the skin appears lighter.

Other ingredients are aqua or water, Prunus dulcis or almond oil as emollient, cera alba or white wax which is a bleached form of or cera flava or yellow wax. It also contains cetyl alcohol, stearyl alcohol, and glyceryl oleate as emollients and thickening agents. Most emollients can be used safely but may sometimes cause burning, stinging, redness or irritation in susceptible individuals.